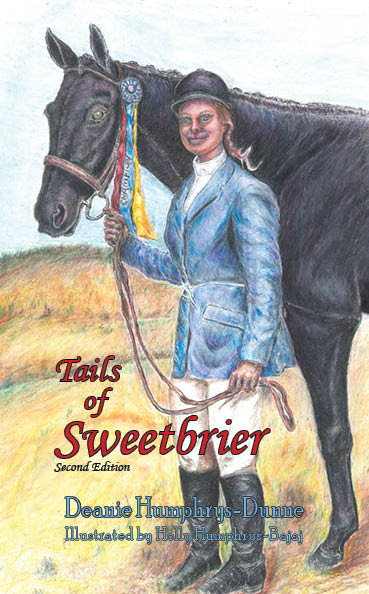 Excitement was surrounding us. I studied Medical Coding with the hope of securing a job using my new skills. I worked tirelessly preparing for the daunting final exam and scored well. I even got a letter of recommendation from the school for scoring in the top ten percent. But actually being hired was far more difficult than I imagined. It seems that people were hesitant to hire a Medical Coding person who had no experience. Naturally, this adventure didn’t end the way I hoped it would. What path should I take now?
One morning in 2009 I was startled by a strong intuition prompting me to write a story about my childhood at Sweetbrier Farm, the riding school my parents owned. Should I dismiss this feeling? The intuition was relentless. I felt a new excitement because it might be an opportunity to inspire children. Years earlier I enrolled at the ’s Literature, but I never had the confidence to plunge into the uncertain world of becoming an author. While I was still sorting through my feelings I remembered my dad’s advice. He always said, “When you’re afraid to try something, think of the worst that can happen.” Following his recommendation, I decided the most traumatic thing possible would be no one would publish the story, so I would improve it. It’s most unlikely that I’d pass away from not having a story accepted, so I embarked on the new journey to create my first book, Tails of Sweetbrier.
One important lesson I learned about creating an engaging story is that you need an opening that captivates your reader, particularly when you write for children. If the opening is boring, your book will be nothing but a dust collector from that moment on.
Here is my opening paragraph for Tails of Sweetbrier:
“Have you ever really wanted to do something but you came across a road block of some kind? Maybe you are afraid of new things, or maybe you have a physical challenge. Are you going to follow your dream or are you going to push it aside without really trying? You have to make a difficult choice. I made that choice once and it changed my whole life, by giving me experiences I would never have had if I took the easy street and had not tried.”
Tails of Sweetbrier is an autobiography of a little girl who wanted to become a champion equestrian, in spite of her handicap. What happened when doctors told my parents I would never walk? My dad refused to accept this diagnosis. I still remember him carrying me out of the office that day.
He said, “Just because the doctor said that, it doesn’t mean he’s right. I’m going to teach you to ride and you will be fine.”
My dad and I faced many challenges together. We proved that the doctors were unquestionably wrong. There were days when I’d fall off my horse multiple times, but he taught me I that giving up was not an option. If you have a passion, you must pursue it. I do believe that anything is possible if you persevere and Tails of Sweetbrier is proof that anything can happen if you refuse to give up on your dreams. You can imagine how excited we all were when my first story was accepted by the publisher after only a few days of nail biting and sitting on pins and needles!
It was a few months after Tails of Sweetbrier was published, that I had completed my first fictional children’s story Charlie the Horse. How would I make this story entertaining for children? Charlie tells the story from his point of view. Charlie the Horse is an adorable little fellow who wants to become a race horse like his dad, Charles the Great. Although Charlie knew he wanted to become a well-known race horse, he found that he couldn’t accomplish his goal by losing focus on it. Charlie learned that if he stopped to munch on the daffodils and tulips growing along the edge of the race track, he wasn’t going to reach the finish line first. Charlie soon discovered if he wanted to be a champion, he must work hard
The sequel to Charlie the Horse was Charlene the Star. Charlene the Star is a ravishing red horse, who is Charlie’s little sister. Unlike Charlie, she finds that racing is not her forte. She goes to great lengths to show her trainers that she would rather be doing something else. She even has tantrums and yawns while she’s running. Charlene the Star wants children to know that is okay to have different natural gifts than your friends. She found an entirely different talent than Charlie and she excelled at it. Charlene tells the story herself and she is amusing.
Charlene the Star and Hattie’s Heroes is my latest book. This humorous tale involves Charlene and her friends, Hattie, Wooliam, and Elliott, who are looking for something exciting to do in their spare time. Hattie is an endearing chicken who likes to wear hats. Wooliam is a sheep with a purpose and Elliott is a handsome dog with an oversized head. They create their own coaching business to help horses with training issues. Together they learn the values of friendship and teamwork.
My objective as an author is to continue to inspire children and help them realize that they are precious and gifted. Children should always strive to achieve their goals. Here is the closing statement of Tails of Sweetbrier, which will illustrate this point:
“Suppose your friends say you can’t do something. If my parents had listened to the doctor who said I would never walk, think of what I would have missed. I wouldn’t have learned to ride or jump. I wouldn’t have known Peach. We wouldn’t have become champions together. You have the power to make your dreams come true so reach for them and don’t accept anything less!”

Posted by Deanie Humphrys-Dunne at 9:56 AM