Snowman, the story of friendship and fate 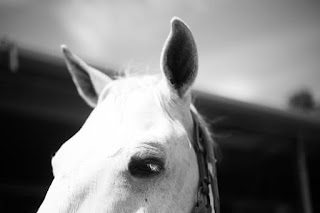 Have any of you seen the amazing documentary called "Snowman?" Even if you're not a rider, my bet is you'll love it.
The story opens with rider and small riding school owner, Harry DeLeyer, narrating. He'd been with horses all his life. He and his wife, Johanna, were both born in Holland. During the war, they were part of the resistance, a group that helped Jewish people escape Hitler's regime. The parents of someone they helped sponsored Mr. and Mrs. DeLeyer to come to America. Harry started his own riding school. Who were his best advertisements? His eight children; Harriett, Anna Marie, Harry Jr., Billy, Martin Joseph, Andre, and Haike.  He wanted them to be great examples of his teaching skills so he would attract others to his Hollandia Farm.
There were many similarities between  Harry DeLeyer and my dad. We also grew up on a farm and the horses were cared for before we went home. Our dad wanted us to be great examples with our riding skills and sportsmanship. My sisters and I never considered not competing in bad weather. Our dad would not have been pleased. We also had our own Cinderella horse, Fleet Nancy. She was a failed racehorse, who'd been hurt in an accident just before my dad bought her. She may have failed as a racehorse, but she shined as a hunter and she loved her job.
One day Mr. De Leyer went to the auction in New Holland, PA, searching for a good horse for his lesson program. He got a flat tire along the way. When he got to the auction, it was almost over. He noticed a big gray horse loaded on the truck, headed for the slaughterhouse. He noticed the kind expression in the big horse's eye and bought him for $80. Harry noticed markings on Snowman, showing he'd been used as a plow horse.
Snowman was wonderful with all of the riders. He took great care of them and everyone adored him. Things went along smoothly until Harry decided to sell Snowman to one of his friends, about six miles away. A few days later, Snowman trotted into Harry's yard. Naturally, Harry thought his friend forgot to close the gate. But Harry learned the gate was not the problem. It was closed. Snowman jumped the fence.  The two men decided to make the fence higher. Still, Snowman came back to Harry's yard. Eventually, Harry decided to take Snowman back.
Harry chose to train Snowman to jump. After 3 months of training, Snowman entered a small show. he won the jumper championship. People laughed, believing Snowman's win was a fluke. So Harry entered a big show the next time at the Ox Ridge Hunt Club. This time, Snowman edged out a famous jumper by one point, to win the championship again.
Harry and Snowman were an amazing team. They won championships at Madison Square Garden, and other places. In fact, Snowman held a jumping record of seven feet for ten years!
Snowman knew Harry was his friend and he'd jump anything Harry steered him toward. They shared an amazing bond don't you think?
Snowman is a beautiful story about the incredible friendship between a man and his horse. I hope you see the movie or read one of the many books about Snowman's talents.

Posted by Deanie Humphrys-Dunne at 2:40 PM