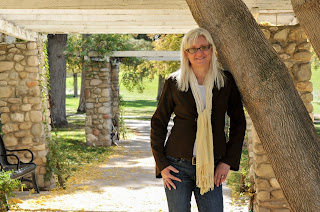 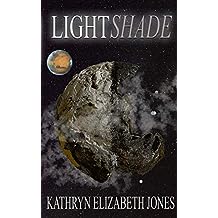 Kathryn, your new book sounds intriguing. How did you get the idea for it?
Great question! My grandson, Christian, came up to me one day and asked, “Why don’t you write boy books?” I asked him what sort of book he’d like if I was going to do that. He said, “Well, I have always wondered what would happen to the earth if it stopped spinning.” LightShade was born. The best news is that, yes, boys will love it, but so will girls!
What’s the title of your new book? Tell us a little bit about it, without giving away too many surprises.
The complete title is, “LightShade – The Space Adventures of Aaden Prescott.” LightShade is book one and takes place in the future where many advances in technology have been made, including flying cars, cyborg police officers, and yes, talking plants. The book is filled with humor, many surprises, and plenty of opportunities to ask yourself, “Is the Prescott family going to make it?”
What genre do you think it’s most suitable for?
LightShade is tween science fantasy.
What do you hope your readers remember most about the book?
Faith is a big deal. It doesn’t come easily, nor does listening to those who may have passed through some things you haven’t yet grasped. There is also something to be said for honoring your talents and abilities. Pride can get in the way of what we do well.
When do you expect your book to be released?
August 29 is the release date. I have some fun things coming up after that time. There will be a release party at The Printed Garden in Sandy, Utah on Friday, August 31 at 7 p.m., and plenty more fun after that. My website www.ariverofstones.com will let you know what’s coming up.
Do you have other projects you’re working on?
I have just finished the first draft of Light Descending, book two of the Aaden Prescott Space Adventure series that will be out in the spring of 2019. I am also working on the third book in the Brianne James Mystery series. This will be out in the fall of 2019.
Do you have a favorite part in the book?
Yes!
Unfortunately, I don’t want to give anything away. But I would be happy to share the beginning!

Beginning of the End
You'll probably hate me, but I don't care. Most people on Earth hate me already, and if you're reading this book, you are one of the few who escaped. Wait, that can't be right.
But I'm getting ahead of myself.
It all started with the newscast. I don't usually listen to the news, but there it was that day like fire. My mom was making dinner and I was playing with Legos. If you remember how Legos used to be, you'll be surprised that I heard anything, but that day, that day I'll never forget, we were told the horrifying truth.
Mercury was on its way to Earth. Not to visit, if you get my drift, but to crash land. At first, I laughed it off, but then I remembered it wasn't April Fool's Day. It was August 1. It was hotter outside than the heater running, or fire lighting up a swimming pool.  If I told you I wasn't scared, I'd be lying.
Mom hadn't heard it. But I blinked at the projected flat screen in shock. Sure enough, the words repeated themselves. "Prepare yourselves," the man said. He had fake hair on the top of his head to look real and a frown on his face that was so wide, I knew that if he could be tipped upside down, the smile I'd get would be as big as anyone would give if they’d received what they wanted for Christmas.
Except – this wasn't Christmas. It felt like the stuff I'd learned in Sunday school about the Earth ending and the apocalypse. Except, it wasn't that, or was it?
I dropped the Lego I was holding. It was green. I still remember the color because of what happened afterward. If you don't believe in little green men, you should. And you should believe in UFOs, patches in the grass in the shape of circles, and the movie ET.
But I'm forgetting already.
My Mom looked at me in shock. "What?" she asked, even though I’d told her the truth as calmly as possible. My hands were shaking, but I hid them in my jean pockets so she wouldn't know the complete truth.
Some things are better for a mom not to know.
So, I told her again.
She laughed.
I got mad.
She laughed harder. And then she looked into my eyes. Really looked, you know the way moms do when they think their boy has messed up or told a lie to their brother. I don't have a brother, but I know these things.
She said, "Really, Aaden.”
I'd been told about my 'imagination' since the time I knew what people were saying. And I knew something else – something so terrible, that, up until that night and the newscast, I thought it was the most horrifying thing I would ever hear.
"Aaden… really. What fire are you going to start now?"
I'd been told about the meaning of my name for years. Now that I was ten, I was beyond tired of hearing it. I suppose you want to know what my name means as if you really care, but maybe it will be of some interest to you after you hear what the newscaster told us next. For, after I got Mom to leave the kitchen and come into the living room – which took some effort I can tell you – she stood with her mouth open, as if I'd told her I was going to leave home or something.
But then again, we were all going to have to leave home – and soon – or we'd be scorched.
So, here it is. Two years ago, when I was bored and really had to know the truth for myself, I went to Mom's computer, and put in the spoken password I wasn't supposed to know.
I shouldn't have been surprised, but I was. "Someone like fire,” the computer said.
I looked into my mom's eyes now, and the television was still blaring the news of Mercury. We had only two weeks to find safety.

Is there anything else you’d like to add?
I have already mentioned that boys and girls will love this book, but I’m also hoping some teens and adults will read it. LightShade is a clean read and there are readers of all ages who want that in a book. There is also a lot of symbolic imagery for the deeper

Is there anything else you'd like to share?
The year is 2037. The Earth is about to be destroyed along with the human race.  Fortunately, Aaden’s father is an astronaut. Unfortunately, Aaden’s family is not on the planet’s escape list.
With only two weeks before Mercury blasts through the Earth, the Prescott family must travel by foot to the Ophir mountains in Utah where a space plane is waiting.  They must hide themselves within the plane’s walls and escape Earth before it’s too late.
With the help of Neva, an alien living secretly on Earth, they will get additional help – enough to keep them going. But will Aaden have the courage to use the powers within him he is only beginning to understand? Will he have the faith to listen? And if so, will time be in their favor, or will the Earth and all its inhabitants, ultimately turn… LightShade?

Thank you for spending time with me today, Kathryn Elizabeth. It was fun learning about your new book. Best wishes.

Posted by Deanie Humphrys-Dunne at 2:36 PM