Writing for Children? Question Everything 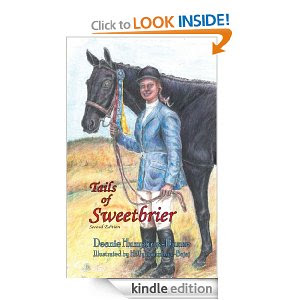 Today, we're going to investigate how I wrote my first book for children, Tails of Sweetbrier. It's an autobiography, so I approached the project differently than when I wrote Charlene the Star or Charlie the Horse.

Throughout Tails of Sweetbrier, I asked questions to draw the reader into the story. For example, I asked, "What happened if I tapped on the stall door three times? Chiefie would come to the front of the stall so I could see him." (I was too small to see over the top of the stall) I felt that asking questions would peak my young reader's interest. It's most important to make he/she curious about what will happen next. Otherwise, the child would soon become bored and abandon the story. This is the opening paragraph of Tails of Sweetbrier:

How could I help the reader feel connected to whatever event was being described? I decided that revealing my thoughts throughout the story would be a good way to accomplish that. For example, when I was first learning to walk, at four years of age, I wrote this thought:

"Now I fit in. I don't feel like Kermit when he said, "It ain't easy bein' green." I felt like other kids because the world looked entirely different now that I wasn't crawling everywhere.

I had difficult time deciding whether or not to include one chapter in particular. It was called "Fire" and it detailed a fire we had in the barn. I wondered what this chapter would bring to the story. Why was it important? Two cherished horses were killed. The heat of the fire was too intense for my dad to open the stall doors to rescue them. My mom's pony, Chiefie, was one of the victims. She adored him. Once he had an abscess in his throat and she stayed up all night medicating him until he recovered. After the fire I wrote:"Will we always suffer this sadness? Will we rebuild? Will we have the courage to start again?" At first, I considered omitting it. But I realized it was important for children to learn that sad things happen in life. The events in this chapter would show children that we overcame the sadness and rebuilt our farm. They would learn about another instance in my life when not giving up was the best choice.

When I was writing the chapter called, "The Next Big Decision" I described trying to convince my dad to teach me to jump horses. He wasn't in favor of teaching me because he knew I'd fall of many times in the process. So I formulated a plan. I wrote:

"I started building my case, like someone facing a jury for the first time."

When my dad didn't embrace the idea immediately, I made him relent with this statement:

"But Daddy, remember you always said I could do anything I wanted, if I tried. You even taught a blind person to jump, so if he can do it why can't I?"

At that point, I knew he had no defense and I'd be able to learn to jump. It took many years, but I was able to compete successfully in major horse shows around the Northeast.

I close Tails of Sweetbrier with this sentiment:

"You have the power to make your dreams come true so reach for them and don't accept anything less."

This statement captures the message of the story, that anything is possible if you persevere. I hope you enjoyed taking this journey into creating Tails of Sweetbrier with me.
Posted by Deanie Humphrys-Dunne at 7:42 AM