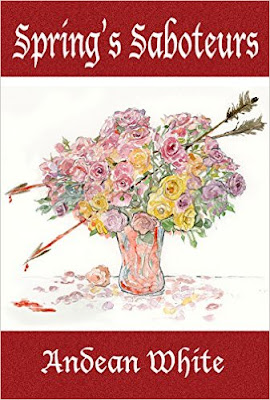 "Hello, eveeryone. Today I'm spending time with gifted author, Andean White. We're discussing his new book, Spring Saboteurs. We'll get right to the questions so you can learn about his exciting story.

Tell us a little about your new book, Spring’s Saboteurs.
Prince Argo has arranged the deaths of his older sister and two brothers. Now the king, his deceptive and clever planning skills set in motion, hoists a multifaceted revenge scheme to overthrow Manshire Province. Kidnapping Queen Althea’s younger sisters initiates a whirlwind sequence of events threatening the lives of the Manshire Queen, the Captain of the Long Bows, the Queen’s husband, and the province.
Lieutenant Charles Cromwell, Argo’s Field Commander, has trained a militia four times larger than the Manshire Long Bow Knights. His vast battle experience makes him the perfect leader for Argo’s scheme.
The scheme is so well planned; the first elusive clues evade Captain Oscar until the ransom letter arrives. Oscar must marshal all of his skills and separate reality from ruse provided by mysterious characters with ties to Argo.
I loved your first story, Winter's Thief, Brad. This one sounds equally exciting. I can' t wait to read and review it!

Tell us something about your main character. Is he/she your favorite?
Oscar is the ultimate good guy—Captain of the Long Bow knights, Queen Althea’s most trusted knight, widower, and father. He has dedicated his life to Manshire Province.
My favorite character is Bernard the surprisingly gentle hermit. Bernard has a mysterious sense of timing. He is completely comfortable with his modest existence, which is a sharp contrast to his educated manners and speech. Everyone that meets Bernard, and his wolf Exeter, leave with a feeling that he is more than just a hermit who happens to be the brother of the enemy king.
I loved Oscar in the first story. He is valiant and a great hero. Looking forward to meeting Bernard.

Does the main character change during the story?

After Oscar is imprisoned, Manshire’s future falls into the hands of his young son Kendrick who must determine the enemy’s might, the location of his father (if he is still alive), and how to defeat the ruthless field general.

I"ll bet Kendrick will need some of his Dad's amazing skills to solve the mystery.

What are some of the obstacles the main character must overcome?
Oscar is a man of action and he struggles with the complete absence of evidence—no clues concerning the abductions and the location of a mysterious lady who has valuable information.
Further frustration builds as the size of the enemy’s militia appears to grow each day and it is many times larger than the Long Bow knights.

What is the setting for your story?
Spring’s Saboteurs is a medieval like tale centered in Manshire Province on the island continent of Estmira. Manshire invaded its southern neighbor when the abuse of the Saraton citizens was discovered.
What genre would enjoy your story most?
Young adult.
Spring’s Saboteurs has some violence and no coarse language.
I enjoy young adult stories, especially without adult language.

I know this is a sequel to your exciting book “Winter’s Thief”. Are you planning more books for the series?
The third book Summer’s Swarm I hope to release in May 2016. An old Manshire enemy forges an alliance with the leader of a giant nomadic horde moving toward Manshire.
A fourth book yet to be titled is planned for early 2017.
You're a gifted author, Andean. I'm anxious to read all of your books.

Where may we buy your books?

Thank you so much for spending time with me today to talk about your exciting new book, "Spring's Saboteurs. It was great fun to learn about your book and future plans, Andean. I'm excited for you and wish you the best in all of your ventures.

"You're welcome, Deanie. I enjoyed our time together as well."

Posted by Deanie Humphrys-Dunne at 7:45 AM