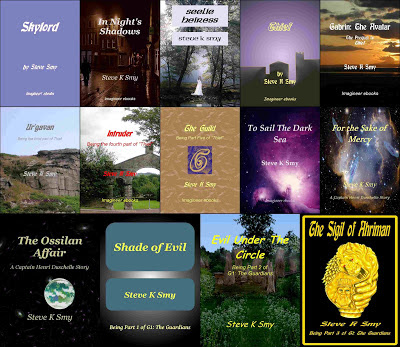 "Today I have the tremendous honor of welcoming the gifted author, Steve K. Smy.
"Thank you so much for spending time with me today, Steve. I can't tell you how excited I have to be chatting with you today about your wonderful collection of books!"
"Thank you for inviting me, Deanie. I'm pleased to be here."

It was way, way back.  We’d just discovered that cave walls weren’t very portable… er, no, that’s the wrong story!  I’d been an avid reader for around 10 years or so, utterly besotted with how simply stringing words together created so many different things.  By 13, I was experimenting with something longer than the normal pieces of  writing for school.  I also hated school, so if I could write about things I wanted to write about, then I’d be in a kind of double heaven.  That’s when I wrote my first novel.  Nothing astounding, of course, but when you’d only written a few paragraphs before, it seemed incredible.  More, it gave me a heck of a buzz!  The discovery of the writer within me was the best thing about 1970!

2.     What are the titles of your books and what genre are they?

Oh now, there’s rather a lot!  On both counts.  There are the short stories, each of which I released as a free ebook.  The first was a science-fantasy for young people to adults, called Skylord.  Next to come along was a science fiction tale, pure space opera,  called To Sail  The Dark Sea, which has since become one tale in a series, The Captain Henri Duschelle Stories, which continued in the two novelettes For the Sake of Mercy and The Ossilan Affair.  I then had a bit of a play outside my usual genres , writing the short story In Night’s Shadows, which was a slightly different look at a popular horror motif.  I pursued experimentation with combining fantasy, an old favourite, with a hint of romance, to write The Seelie Heiress, which is definitely for adults.  Having written that, I was puled back to fantasy and proceeded to write a series of fantasy short stories, in the Thief series.

As this fantasy series tailed away, two new directions begged to be pursued!  That was when the sci fi novelettes came into being.  Meanwhile, a new adventure was underway, plunging into mixed genre but based on horror – a genre I had little taste for, most of the time!  That was when the series that has kind of overtaken my life was born: G1: The Guardians.  Now at two novelettes, a novella and a WIP that’s likely to be a full novel, to the count so far.

Ideas come from all directions and are so random they hint at a certain lack of sanity!  There are times when there’s no obvious trigger, while I might see a pattern that suggests something unrelated to it.  There’s absolutely no controlling the flow LOL!


What are some of the ingredients for an exceptional story?

I’ve almost finished a new book, which will be the fourth, and longest, tale in the G1; The Guardians series.  As would be expected, many characters are met in earlier stories, but more of them now take on greater depth.  In other words, we’re really getting to know them.  The story is also more complex, with more twists and turns than the others, with more action.  This does mean more violence, but it’s no more than is consistent with the story.  There are, I hope some surprises in store for the reader.

I’m not convinced that I’m qualified to answer the second part of this.  For me, it depends on the length of the story and what the core of it is.  For instance, writing deep characters and detailed descriptions can simply waste the space available in a short story.  Then, I’ve read lengthy novels of great worth with very little more in the way of character development.  I guess, it comes down to the essence of the story.  Get that right, and you have some hope of getting an exceptional story, even if you don’t go beyond just telling a good story in every other respect.  I have, of course, come across some genius ideas, but the rest has been abysmal, with no real effort to do any more than patch together the brilliant with worse than mediocre storytelling.  Ultimately, though, it’s not the author who decides – or the critic.  It’s the reader!  Only the reader can say if a story is truly exceptional.

5.     What advice would you give to aspiring writers?

A frequently asked question, with far too many answers.  First on my list – never use the word ‘aspiring’ about yourself!  You’re either a writer or you’re not.  There isn’t a middle ground.  Too many people think it’s only about being published.  It isn’t.  In fact, publication is simply a consequence that may, or may not, happen as a result of your writing.  Second – listen to, read, or otherwise absorb advice and then do only what you want to do and reject the rest.  It’s not about advice being right or wrong – only about it being right or wrong in your case.  Third, and last – if you don’t enjoy it, you’re doing it wrong!  Have you tried to do what others insist you must do?  Do you have to write furtively, because of the disapproval or mockery of those around you?  Were you told, by a teacher, a reviewer, a critic, or some other person that you were not a writer?  Chuck everything that you’ve been told away, tell the idiots to find some other planet to live on, and just write.  Write as you did when you first fell in love with it!  Fourth – and yes, I know I said third was last LOL – write, write, write and, when you have a few spare moments, write.  It’s what you want to do, and it’s the only way to exercise – believe me, going to a gym will not improve your writing!  Nor, in fact, will attending every creative writing class you can find.  Everything that takes up your time is the enemy of your writing.  Prioritise: family, food and drink, writing and, when time permits, sleep.

"It was such fun spending time with you today Steve. I have no doubt that your  thoughts and philosophies will enlighten so many people."
"My pleasure, Deanie"

The Ossilan Affair (Smashwords, also available from all Amazon sites)