"Please welcome amazing author, Colleen Chesebro. I can't wait to tell everyone about your book, Colleen. We'll get right to the questions.

Colleen, tell us about your new book. 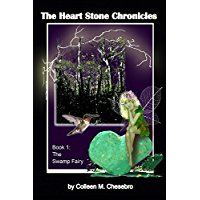 Hi, Deanie. Thanks for the opportunity to share the magic of my new book. I used the classic “hero’s journey,” to tell Abby’s story. Fourteen-year-old Abigale Forester, recently orphaned and a ward of the State of Illinois moves from Chicago to Florida to live with her aunt, her last living relative. Magnolia Forester becomes her legal guardian, and together they claim an ancient inheritance; land that belonged to Abby’s mother’s family for generations.
Abby holds onto the only piece of her mother she has left, a calcite pendant and her mother’s most sacred possession. It is with her aunt that Abby discovers the truth of her legacy. The pendant is more significant than she could imagine. Forged from a giant mystical heart-shaped stone found on the very swamp land Abby now owns, it holds the power of her ancestors.


But with that power comes greater responsibility, one that pits her against Rafe Cobb, a greedy land developer, who will stop at nothing to own Abby’s swamp land. As Abby learns to be part of a family again and explores her love of horses with friends, Savanna, Blake, and Cash, the swamp slowly gives up some of its secrets. She is summoned by a primeval nymph, who teaches Abby that her true destiny is to protect the nymphs from evil in an ever-changing modern world.
It's a fascinating book, Colleen. I know it will be loved and admired.
How did you get the idea for it?
A couple of years ago, we lived north of Pensacola, Florida in a rural area where most mornings, I walked along a country road for exercise. One foggy November morning, I saw something in the bushes at the side of the road next to the swamp that I will never forget.
I thought I saw a ruby-throated hummingbird, but as I peered inside the bushes, I realized I was witnessing a magical event. It was something else entirely. I saw a tiny green being which I now believe was a swamp fairy. I know it sounds crazy, but I’m not kidding.
The vision didn’t last long, and I was paralyzed and rooted to the spot. I couldn’t move. Later, I would surmise that I had been enchanted and had received the gift of “fairy vision.” The swamp fairy had ignited my imagination.
After that, there was no stopping me. I started to write short stories about the swamp fairies. Then, the dreams started. Slowly a story began to form in my mind as if I was channeling the stories from the nymphs themselves. I knew I was a fairy whisperer because they wanted me to tell their stories. I have no idea where some of the story events came from. It was like being presented with a gift.
What an amazing story, Colleen and a great inspiration to you.
Are you planning a sequel to your story?
Yes. The second book in the series is called, “The Heart Stone Chronicles: The Meadow Fairy.”
The story continues as Abigale Forester journeys from Blackberry Ridge, Florida to Bent Grass, Colorado when her Aunt Magnolia accepts a job as a researcher working for an author who specializes in writing about myths and paranormal activity.Abby, along with her deceased mother’s most sacred possession, a calcite pendant, continues her legacy as a Fairy Whisperer to the primordial fairy nymphs who inhabit unique places scattered about the world.
In Colorado, Abby meets two young friends, Crosby, and Landon Miller, who along with their family are beekeepers on a small farm under the shadow of Pike’s Peak. Abby is summoned by a primeval nymph who asks her to resolve the secret of why the bee population is disappearing from the prairie meadows.
With the help of Nate Bannock, a Native American Ute rancher, Abby learns the astonishing truths behind the decimation of the bee population.
Does Abby have what it takes to save the bees and the Meliae Meadow Nymphs before it is too late?
I can't wait to read the next one!
What would you like readers to remember most about it?
The novel centers on two main themes. The first issue Abby deals with is how to become part of a family and to understand the responsibilities of her family heritage. I also added one of the most pressing ecological concerns of the day, the loss of our natural wetlands by human encroachment. My hope is to inspire young people to become scientists so they can solve these environmental issues.
However, I tried to touch on issues that affect kids today like, bullying, prejudice, and trying to fit in when you know you are not like anyone else. These are concerns that all young people have. I hope the message teens get is that it is all right to be different.
What advice would you like to share with aspiring writers?
Never give up your dream of writing. Keep reading and learning to perfect your craft. Be patient and learn from others. Always give the gift of your time to others… it will come back to you tenfold!
Such valuable advice, Colleen.

Is there anything else you’d like to add?
I contacted my friend, Irene, of IreneDesign2011 and asked her to make a replica of Abby’s calcite fairy stone pendant. She created two versions of the necklace, featuring a small calcite stone and a large calcite stone. The pendants are for sale at her Etsy Store with these links: here, for the large calcite and here for the little calcite in Irene’s Etsy Shop.
"Thank you so much, Colleen. We had a great time together.
"I enjoyed it as well, Deanie."

Posted by Deanie Humphrys-Dunne at 3:11 PM